These two guns were brought to our shop to have new “trucks” built. 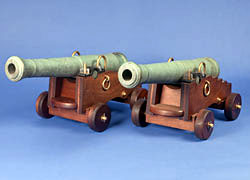 Numbers on the trunnion caps indicate that they are of French origin very close in design to a French M1786 swivel gun. The trunnions are marked with numbers “P165” on one side, indicating weight in French pounds equaling about 181.5 American pounds. The other end of the caps are marked “No 43” and No “30” these are registry numbers.

They are muzzle loading guns with a 2” bore, indicating that they are “1 pounders” or would have fired 1 pound of canister or grape shot, whichever they called it in France at the time, as an antipersonnel load. Normally this type of gun was employed from “The Fighting Tops”. The fighting top was a strong wooden crow’s nest positioned high on a warship’s mast, manned by marine sharpshooters whose job it was to clear the decks of enemy crew before boarding. They would have been mounted on a swivel base for ease of movement when firing down on the enemy ships. 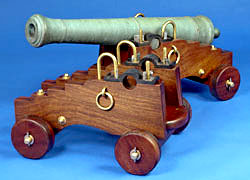 During the early 1900s many swivel guns were sold in England with the Muller type trucks seen here, rather than the original swivel bases. These were rather complicated to build as the canted cheeks have an included angle and bevel in toward the top as well as out toward the rear. We have used mahogany to be more weather resistant. The metal parts have been all custom made. The finish is oil that can be reapplied as needed.

This type of shipboard truck was used for a variety of cannons fired from lower decks. In order to fire them on this type of truck they were rolled back from the bulwarks loaded, then rolled forward for firing. The quoin is moved forward and back to adjust the height of the barrel. Ropes through a pulley and attached to the rings on the sides pulled them forward, backward and also kept them from rolling across the deck after firing.