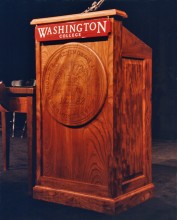 George and Barbara Bush and Dr. James Watson were the first guests to use Washington College’s new podium—a wooden lectern literally carved out of one of the College’s most cherished traditions.

Frank B. Rhodes Jr., a talented Chestertown cabinetmaker and a 1982 graduate of the College, built the podium with wood from the fallen Washington College Elm. That tree, a sapling planted in 1928 that grew into the signature landmark on campus, died from disease 10 years ago. The Washington College Elm was a descendant of the tree under which George Washington took command of the Continental Army. The College gave Rhodes the wood from the tree with his promise to make something out of it for the school.

The result is a five-foot-tall wooden podium with the College seal carved on the front. With the Bush addresses, the podium made a national debut, appearing on C-SPAN and television broadcasts as far away as Texas.

Rhodes later confessed he was nervous from his seat in the Cain Gym during Convocation, afraid something might fall apart on the podium’s debut. It was a silly fear—the sturdy podium was put together too well for much to give way—but one that must have been somewhat relieved by Barbara Bush. In her speech, she assured her audience, “Because this is a new podium, I’m going to go easy on it.”